Coffee is not your thing? Reduce the heat a little! Cold brew coffee and iced coffee are two types of coffee that many people are familiar with. How do you define them though? What do you think? Aren’t these two things exactly alike?

Simply said, they are not the same. But if you want your beverage salty or sweet, you could enjoy any one of them. Discover the subtle distinctions between these two delectable coffees in the upcoming sections.

You can satiate your chilly coffee craving in a matter of minutes with an iced cup of joe. Because of the speed at which the ice melts, this drink has a stronger flavor, greater acidity, and is more easily diluted. Because of this, many people appreciate or tolerate the dilution of their iced coffee so that they can get their fix quickly.

There is some equipment that is intended expressly for brewing iced coffee, but this is a way that is less commonly considered when people are talking about iced coffee in general. 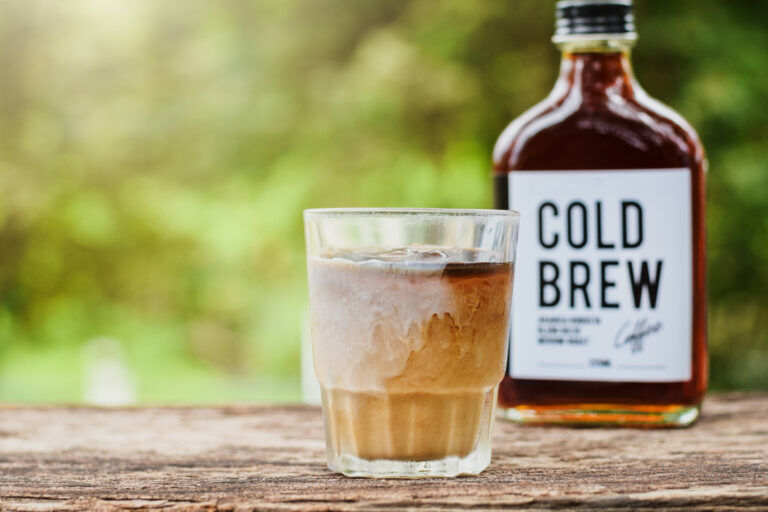 What is Cold Brew Coffee?

For the most part, the term “cold brew” refers to the method used to brew rather than the temperature of your coffee.

This type of brew is also never subjected to high temperatures throughout the brewing process, and instead depends on room temperature and milder temperatures.

Many cold-coffee enthusiasts prefer cold brew because it has a more intense flavor and caffeine level than regular coffee. People with sensitive stomachs will benefit from it because it has less acidity and is simpler to digest.

This is where we’ll get down to business. Despite the fact that they both rely on ice and cold temperatures, there are several distinctions between the two. The next time you’re in a coffee shop, you’ll be able to make an informed decision on what drink to choose.

If you use hot water to brew coffee, you will extract the coffee’s taste more quickly and the chilling process will help consolidate the muted, over-extracted flavor notes that may have been extracted too quickly.

Cold brew coffee, on the other hand, presents a somewhat different narrative. Using this process, the grounds must soak in water for a long time, so the taste is considerably more intense and richer.

Because of this, cold brew coffee is sometimes referred to as “cold brew concentration” because it packs more of a taste punch. If you prefer a milder flavor, you could modify the coffee to water ratio.

Size DOES count when comparing iced coffee with cold brew. There are several factors that affect how quickly and efficiently the brewing process works: grind size, for example.

If you use a drip coffee machine, French press, or pour-over technique to brew your iced coffee, you can expect the grind size to range from medium to coarse, depending on whatever method you choose.

It’s a different story when it comes to cold brewing. It’s crucial to choose a coarser grind when steeping your coffee grounds for an extended period of time so that the water can readily filter through the grounds without extracting them excessively.

When brewing with the improper grind size, over-extraction can easily occur since the size of the grounds will impact how efficiently the water can filter through the grounds. Because of the coarser grind, you can prevent the harsh flavor that occurs from over-extraction.

Cold brew and iced coffee can be characterized by their brewing processes, which are unquestionably the most significant distinction.

This is an easy and uncomplicated process since you’ll just make hot coffee and then pour it onto ice cubes in order to get the desired effect.

In contrast to other methods of brewing, cold brew focuses on time rather than temperature to produce its distinctive flavor. The extraction of flavors from coffee grinds can be slowed down by colder temperatures.

The slower extraction method ensures that all of the coffee’s taste is fully removed without the risk of over-extracting. On average, it takes six to twelve hours to create a batch of cold brew.

In this case, all you need is a cold-brew coffee maker and many hours of your time to create enough coffee to last you for a few days.

Even while iced coffee is fantastic since it’s a quick and easy method to get a taste of cold coffee, it’s not designed to last long. Once the coffee has begun to cool, around 30 minutes after brewing, it begins to go bad.

As soon as the coffee cools down to room temperature, any leftover oils in it will alter its flavor and give the coffee an overall bad taste.

The shelf life of iced coffee, therefore, is considerably shorter. Pouring it over ice not only dilutes the flavor, but it also accelerates the expiration time.

However, cold brew is designed to be consumed over time. Cold brew may keep for up to two weeks if stored properly and portioned properly. The shelf life of your cold brew can also be affected by the concentration of the brew.

This is a good thing because it means you’ll use less at a time and save money in the long run.

You could extend the shelf life of your cold brew coffee by simply adding water to the concentrated batch rather than waiting for the flavor to deteriorate over the course of a week.

Sugar and milk/creamer are two of the most caloric additions you can make to iced coffee or cold brew. Iced coffee and cold brew are both low in calories when consumed on their own, but there are some subtle differences. The fundamental difference between them is the chemical composition of each of them.

Because iced black coffee isn’t made as gently as cold brew, it might be more acidic than cold brew. It has a significant quantity of caffeine, but not as much as cold brew, because it isn’t steeped or brewed for the same period of time.

Caffeine-sensitive people may find it easier to consume the hot coffee after it is poured over ice and diluted, but it will be more unpleasant for their stomachs.

In the case of cold brew, the polar opposite is true. Cold brew contains half the acidity of iced coffee, making it a healthier choice for people with sensitive digestion. As a result, it’s a little gentler on the stomach.

However, people who are sensitive to caffeine may feel the effects of the higher concentration.

It is possible to vary the quantity of caffeine in cold brew by altering the coffee/water ratio. Caffeine consumption decreases with increased water consumption and vice versa. 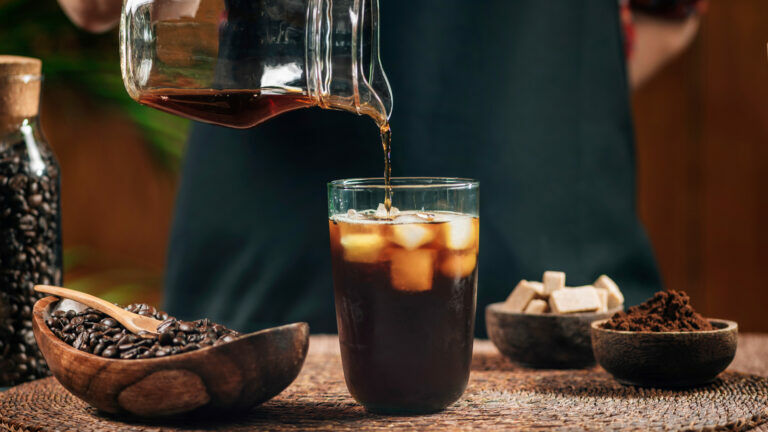 Is there anything else you’d want to know? We’ve got the answers, so don’t worry. The following are some outlier questions that you could be wondering about.

Nope. Unlike iced coffee, latte drinks are made from a separate set of components and are therefore distinct from their hot counterparts. Lattes, as opposed to a hot cup of coffee, are made with espresso, ice, and cold milk.

The cold milk and ice will dilute the espresso, resulting in a creamier, richer cup of coffee. Due to the fact that just water and coffee are used, iced coffee is thinner and stronger in flavor.

What About Nitro Coffee?

Cold-brew coffee drinkers will ultimately come across Nitro Brew Coffee regardless of whether or not they had heard of it previously. Since nitro coffee contains no added flavors or sugars, it’s a stand-alone treat. A splash of milk could be added if you need to tone down the flavor a notch, or you can sip it as-is for a rich, creamy, powerful flavor.

New Orleans Cold Brew Coffee is a lesser-known, but equally remarkable, cold brew coffee. Chicory is added to this cold brew coffee to give it a sweeter, richer flavor. The brewing procedure remains unchanged.

It was the French who first popularized the use of chicory in coffee. Chicory was added to coffee during the French Revolution when coffee was scarce because it offered more taste and body to the beverage.

This habit of adding chicory to coffee to give it an additional “kick” is still prevalent in New Orleans, which was formerly a French colony.

If you want your cold brew with a creamier, thicker, and savory flavor, you could add milk/creamer or sugar to your final product. Moreover, there is no better way to start the day than with a cup of frothy cold brew and some delectable beignets!

While it’s true that iced coffee and cold brew both have their merits, whether one is best for me depends on my own preferences. Despite their similarity in temperature and structure, there are several major distinctions in flavor, caffeine level, brewing methods, etc. that will help you pick which one you may prefer best.

Icy coffee is a great option if you’re searching for something quick and uncomplicated. It’s possible that making iced coffee at home is easier if you have a drip coffee maker, French press, or other pour-over equipment.

In the end, cold brew could be the best option if you are a fan of cold brew and have the time to make a batch. You have the power to decide! Play around with the two!

It’s time to enjoy your morning cup of joe!

How Pillows Are Made: An Overview

How long does a lawnmower last?

How often should lawnmower oil be...

How To Choose A Coffee Machine?

Should I leave my coffee machine...

How To Choose A Dehumidifier That’s...